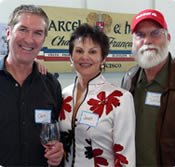 
The 2019 San Francisco Chronicle Wine Competition results are in and ABV wins big!

This year’s competition drew more than 6,800 entries from 1,132 wineries from across North America.

Five of the seven Arbor Bench entries were awarded GOLD and our 2015 Meritage was awarded a prestigious DOUBLE GOLD.

| Santa Rosa, CA, September 2017 |    In the 2017 Sonoma County Harvest Fair Wine Competition, ABV wines brought home a total of nine medals, including Double Gold for their 2014 Estate-Grown Cabernet Sauvignon. Once again, the beautiful Dry Creek Valley reds of Arbor Bench did very well in a crowded field. The 2013 Cabernet and just-released 2015 Cab also earned gold, as did the ABV 2013 Malbec.

“This is a really good showing against some formidable competition,” said Janet Hart, owner of Arbor Bench. “Our Cabs in particular will continue to deepen over the coming years, and we look for great things to come!”

The Sonoma County Harvest Fair is the largest regional wine competition in the United States. Only wine made with grapes grown in Sonoma County, with a Sonoma County designated AVA as the only region listed on the bottle, is eligible for entry.

Twenty-one judges sipped their way through a tidal wave of wine — 1,016 entries — over three days in September to pick the best wines in their categories. This year, the judges came from California, Minnesota, Florida and Vancouver, Chicago and Philadelphia.

| Santa Rosa, CA, June 2017 |    We are excited to report that our 2013 Estate-grown Cabernet Sauvignon earned a gold medal and scored a whopping 92 points in the 2017 Press Democrat North Coast Wine Challenge.

In its fifth year, the NCWC featured a formidable field of 1,107 wines entered from this vast viticultural area, which encompasses a stunning diversity of climate, soil, elevation, and proximity to the coastline, among other characteristics. The California North Coast includes some of the country’s most famous appellations — the premier wine-growing regions of Sonoma, Napa, Mendocino, Lake, Marin and Solano counties. 27 judges rose to the challenge this past April to select what they refer to as “The Best of the Best.”

Said Arbor Bench owner Janet Hart, “We’re very happy with the results, as the Harvest Fair is always a tough competition. We almost didn’t enter our 2014 wines, as we weren’t planning to release them until later this year. For the 2014 Cab and Meritage to win gold medals at this point is a testament to our winemaker Chris Markell’s care and expertise. The last three vintages have been fantastic — very rich and deep-flavored examples of these red varietals. We can’t wait to see how these wines will develop over time!”

| Healdsburg, CA, July 2016 |    The Arbor Bench Vineyards 2013 Dry Creek Valley Cabernet Sauvignon, Malbec and Meritage, all Estate-Grown and all award winning are now available for purchase. So go get some!

“We’re very pleased with the results, and with how the Cab and Meritage wines are deepening and developing with a little aging. We haven’t even released our 2013 wines yet, and for all three to earn medals at this early stage promises good things for the future,” said Arbor Bench owner Janet Hart.

The judging took place at the Cloverdale Citrus Fairgrounds in Sonoma County from January 5-8. 65 experienced wine judges, representing trade, education, media, retail, and restaurants throughout the United States and beyond, evaluated a record 7,164 wines entered by wineries from 28 states.

“We have only just now released this wine, and are thrilled with the judging results,” said Arbor Bench owner Janet Hart.

In addition, the Arbor Bench 2007 Reflections earned a silver medal in the Bordeaux Blends category, and the 2005 Estate-Grown Merlot took the bronze.

The judging took place at the Cloverdale Citrus Fairgrounds in Sonoma County during the week of January 7. Professional wine judges, representing trade, education, media, retail, and restaurants throughout the United States, evaluated a staggering 5,050 wines entered by wineries from 23 states.

A crowd of over 2,000 people packed into the Grace Pavilion at the Sonoma County Fairgrounds to taste the award-winning wines and food during the Harvest Fair Awards Night Gala.

The week before, 25 judges from across the country swirled, sniffed and sipped a record 1,084 entries representing the entire spectrum of Sonoma County wines. All wines entered must be from Sonoma County-grown grapes, making this the largest regional competition in the country.

In its first entry into competition, our just-released 2007 Reflections took a gold medal in the Bordeaux Blends (including Meritage) category.

A crowd of about 2,000 people packed into the Grace Pavilion at the Sonoma County Fairgrounds to taste the award-winning wines and food during the Harvest Fair Awards Night Gala.

The week before, 25 judges from across the country swirled, sniffed and sipped a record 1,051 entries representing the entire spectrum of Sonoma County wines. Far fewer gold and silver medals were awarded this year, making this win all the sweeter. Our Estate Merlot was found to be “an exceptional example of the varietal, only rarely encountered.”

“We’re really happy to win a Gold Medal at this prestigious event,” said Arbor Bench owner Janet Hart. “This medal is a recognition of the fine quality of our grapes, the attentive farming of Duff Beville, and especially the exceptional talent of our Winemaker, Chris Markell, who has taken this vintage every step of the way.”

We were thrilled that in addition to our medal, ours was voted Best Wine Label in the Harvest Fair. Congratulations to Philippe de Potestad for his design, and to Nine Design for bringing it to completion.

| Los Angeles, CA, May 2008 |  The Arbor Bench Vineyards 2005 Estate Merlot won a Silver Medal in the 2008 Los Angeles International Wine and Spirits Competition, widely recognized as one of the top international wine competitions in the United States.

“We are thrilled to have won this medal in what was a very tough international field,” said Arbor Bench owner Janet Hart. “The wine is maturing beautifully, and getting better by the month.”

Now in its 69th year, the competition has maintained the highest standards of integrity and professionalism, with nearly 100 international experts participating in the judging. This year saw over 4,000 wine entries from around the globe.

“We have only just now released this wine, and are quite pleased with the judging results,” said Arbor Bench owner Janet Hart. “This Merlot will only continue to improve over the next several years, so we’re looking forward to great things from future competitions.”

The judging took place at the Cloverdale Citrus Fair during the week of January 7, 2008. Sixty professional wine judges, representing trade, education, media, retail, and restaurants throughout the United States, evaluated 4,235 wines entered by nearly 1,500 wineries from across the country.

The public was able to taste the medal winners on February 16, 2008 at Fort Mason Center’s Festival Pavilion, along with offerings from some of California’s premier artisanal food purveyors, including breads, meats, oils, cheeses, desserts, sauces and fabulous creations from Bay Area restaurants.